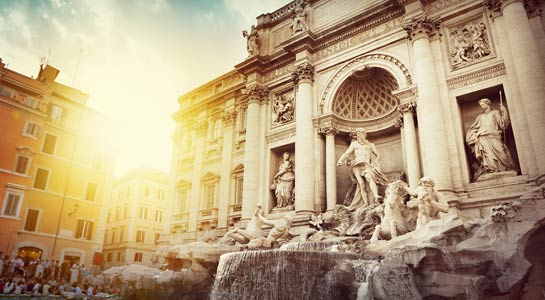 This is a great tour of Rome either on its own or in addition to another tour or cruise. This 4 day vacation package will take you to the iconic sights in Rome including the Collosseum, the Vatican and the roman Forum.

The 4 Day Rome Short Escape travel tour from Adventures by Disney is the best way for the whole family to experience Rome on a time crunch. These amazing landmarks seem to come alive with the history of the Italian landscape as you walk in the footsteps of the Italians who helped develop this area. The food, culture and history is all around you as you embark on your Adventures by Disney travel tour.

Arrive in Rome, Welcome Reception & Dinner at the Hotel

Settle into your stylish and comfortable room at the Marriott Grand Hotel Flora. Begin your adventure by exploring the stunning grounds of this neoclassic and luxurious hotel. Located at the top of the Via Veneto, the hotel is next door to the Villa Borghese gardens and the 2,000-year-old historic Roman walls. You can also ask your Adventure Guide to recommend restaurants and cafés for lunch and ideal activities for your family.

Meet your fellow Adventurers at a welcome reception and then a fabulous dinner at the Marriott Grand Hotel Flora.

Today's guided tour begins as you board a motor coach and enjoy a ride around the city, viewing some of Rome’s most iconic sights. Then take to the streets and ancient byways of Rome—and visit the spectacular destinations you've always dreamed of seeing. Explore the city center, home to the famed Spanish Steps, the Piazza Navona, the Pantheon and the Trevi Fountain, where, as legend has it, you can toss a coin into the fountain to ensure your return to Rome!

Relish a delicious lunch at one of the delightful local restaurants near Navona Square. Following lunch enjoy a privately guided VIP tour of the Colosseum that makes you feel part of history! Built by Emperor Vespasian around A.D. 70-72, the Colosseum was a gift to the people of Rome and soon housed spectacles and games as well as wild animal and gladiator combats. All Guests can participate in an engaging, interactive tour of the Colosseum that gives them an understanding of ancient Rome.

Explore the city's authentic and molto delizioso restaurants on your own. Be sure to ask your Adventure Guides to make recommendations for a memorable meal that fits your family’s needs.

Marvel at the Basilica via St. Peter's Square—one of the largest churches in the world and a renowned example of Renaissance architecture. The iconic dome dominates Rome’s skyline. Initially constructed by Constantine in the early 4th century, it was rebuilt in the 16th century by Bernini, Bramante and Michelangelo. It stands on the site where the apostle Peter was crucified. Considered the first pope, he is buried under the main altar along with other popes who followed. Please note: Due to official Papal activities within the Vatican and St. Peter’s Basilica, the order and timing of activities on Days 2 & 3 may be altered. Vatican Museums activity may also take place on Day 2, rather than Day 3. Your Adventure Guides will advise you of any changes.

Piece together your own masterpiece at this hands-on class on the art of mosaic-making. You’ll work with marbles, glasses and enamels as adult Adventurers will create their own frame or mirrors with tiles, while Junior Adventurers will realize figures of animals, small frames or mirrors with tiles. After class, you will get to bring home the mosaic you created. During class, a buffet lunch will be available.

Experience an exclusive after-hours, privately guided tour of the Vatican Museum—home to masterpieces by the greatest artists in history in a collection spanning 4000 years. Also, be guided by a local expert through the Sistine Chapel where you can get an intimate look at Michelangelo's magnificent achievement.

Say “arrivederci” to your fellow Adventurers and new friends at a delicious dinner in the Vatican Museum.

Transfer to Rome Airport or the Port of Civitavecchia

After breakfast say goodbye to Rome and board your pre-arranged transportation to the Port of Civitavecchia or Rome Airport (FCO).