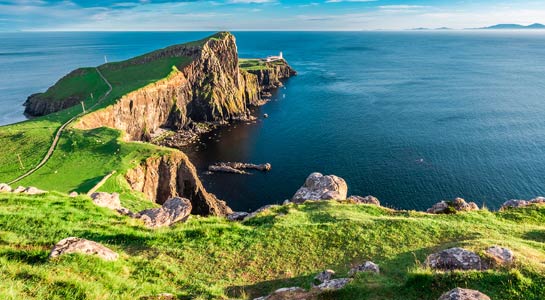 Explore the rugged Hebrides with its untouched coastline, vibrant history, and unique culture. Visit the Isle of Harris Distillery, discover the Neolithic Callanish Stones on the Isle of Lewis and take the Jacobite steam locomotive over the Glenfinnan Viaduct. Along the way visit castles and villages for great insights into Scotland.

The 11 day The Outer Hebrides: Scotland's Gaelic West from CIE Tours places the focus on locations in Scotland that are often overlooked in shorter or city-focused tours to the country. You'll get a feel for what Scotland is like outside of the major cities and the people and families that make and create much of what keeps the country running.

Tour begins at 2:00 pm at your Glasgow hotel. Tour the highlights of Glasgow and discover its unique history with a visit to the oldest house in the city, Provand's Lordship. In the evening join your group for a welcome drink before dinner.

Drive along the famous Loch Lomond, renowned for its unsurpassed beauty.

Visit Inveraray Castle, home of the 12th Duke of Argyll. Tour the elaborately decorated castle containing an armory, many historic relics, and a portrait collection.

Stop in Inveraray for lunch on your own then enjoy some free time to explore Oban.

Drive along the scenic shores of Loch Linnhe to Fort William, the largest town in the Highlands. Board the Jacobite Steam Train and enjoy a spectacular railway journey across the Glenfinnan Viaduct, as featured in the Harry Potter movies, to the fishing port of Mallaig. Spend some free time exploring on your own, then embark on a scenic ferry ride to Lochboisdale on South Uist.

Travel to your hotel on the Isle of Benbecula. Enjoy dinner in the hotel restaurant.

Tour to the Isle of Barra

Drive through scenic South Uist and board the ferry to Ardmhòr on Barra to admire the beautiful white sand beaches. Stop in Castlebay, the main town of the isle and explore independently. Continue to Vatersay, an island just south of Castlebay. After a drive around, take the return ferry to Eriskay.

Enjoy a drink with your group at the Politician Pub before returning to your hotel.

Explore the island of North Uist, a stunning landscape with fresh and saltwater lochs. Visit the Hebridean Smokehouse to see how fish is smoked and enjoy a tasting. Stop at the museum and arts centre at Taigh Chearsabhagh. Continue north to Berneray and board the ferry to Leverburgh on Harris.

Travel on to Stornoway, the largest town in the Outer Hebrides.

Enjoy a scenic tour of Harris, which boasts a wide variety of landscapes. Visit Horgabost and Luskentyre beaches, then head to Tarbert. Go behind the scenes at the Isle of Harris Distillery to witness the distilling operation and enjoy a sample. Then enjoy some free time for lunch.

Travel on to Stornoway for a panoramic tour, followed by dinner at your hotel.

Sightsee around the Isle of Lewis, a relatively flat island with many picturesque sandy beaches and rugged coastline. At Bosta Beach see the Iron Age House, a reconstructed Iron-Age dwelling. Continue exploring with a stop to marvel at the ancient Callanish Standing Stones, which date from 2000 BC. Located above Loch an Duin, visit Dun Carloway Broch, which dates back over 2000 years. Experience history and heritage at Gearrannan Blackhouse Village, a former community converted to a museum and visitor center.

Return to Stornoway for a free evening to dine and explore on your own.

Take a panoramic drive and short walking tour around Stornoway, then enjoy some free time to explore independently. You may choose to visit An Lanntair, an arts and exhibition center, or Lews Castle, which boasts an interactive museum including the 900-year-old Lewis Chessmen. Or, visit the Lewis Loom Centre with demonstrations of spinning wheels, the hand loom, and a craft gift shop.

In the afternoon board the ferry to Ullapool on the mainland. Travel to Inverness for dinner then join a local guide for a walking tour around the city.

In the morning head to the Culloden Battlefield to tour the Visitor Centre, where on April 16, 1746, British Government forces defeated the army of Prince Charles Edward Stuart (known as Bonnie Prince Charlie).

Enjoy some free time for lunch and exploring in Pitlochry. Visit Scone Palace and see the fine collections of antiques before heading to Edinburgh.

Enjoy a Scottish evening with dinner followed by traditional songs and dances. July 26 to August 16 departures enjoy the Royal Edinburgh Military Tattoo on the Castle Esplanade instead of a group dinner.

Enjoy a guided sightseeing tour of Edinburgh, comparing the wide streets and elegant mansions of the 200-year-old Georgian “New Town” with the narrow lanes and medieval townhouses along the Royal Mile, the oldest part of the city. Tour Edinburgh Castle’s historic buildings with splendid views of Edinburgh. The rest of the day is free to explore, shop, and dine on your own. (The Scottish evening with dinner and traditional song and dances will be held tonight for departures from July 26 to August 16.)

Your tour ends after breakfast.