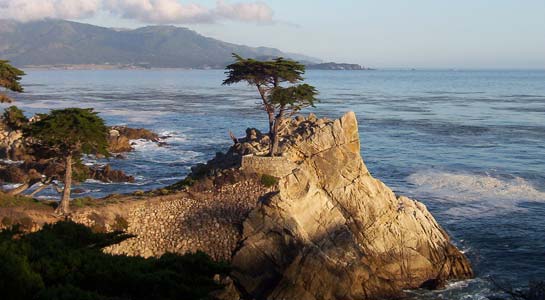 The California’s Gold Coast tour is a 12 day Tauck World Discovery tour of California's Gold Coast, from San Francisco to San Diego. Take in the beauty and history of the area. Many of us have read about the Gold Rush of the 1840s. This tour is your chance to follow in the footsteps of those wonderful pioneers.

The California’s Gold Coast tour begins at the legendary Four Seasons hotel in Beverly Hills, California. You’ll explore Los Angeles and the glory of Hollywood before heading north. California’s Central Coast is one of the most underrated spots of the entire state where the scenery, breeze and wine will keep you with a smile on your face. Your tour then heads north where you’ll visit Monterey, Yosemite and San Francisco on this fantastic tour.

Because Southern Californians have a legendary passion for cars, you’ll begin exploring the dynamic city of Los Angeles with a tour of the historic automobiles, Hollywood cars, hot rods, and altogether extraordinary vehicles at the Petersen Automotive Museum. Batmobile, anyone? After lunch, you’re off to downtown Los Angeles for a walking tour with visits to a historic Broadway theatre and the Bradbury Building, a 19th-century landmark with a magical Victorian courtyard featuring open cage elevators. Check out Grand Central Market, an iconic showcase for the diverse cuisines and cultures of Los Angeles. Take a ride on Angel’s Flight Railway and see some of the city’s most striking modern architecture, The Broad museum and Frank Gehry’s Walt Disney Concert Hall.

Enjoy a tour through Beverly Hills, along Sunset Boulevard, and to the TCL Chinese Theatre movie palace on the Hollywood Walk of Fame, where you’ll see the handprints of many celebrities; Groucho Marx left an imprint of his cigar, Jimmy Durante his nose, and the stars of Harry Potter immortalized their magic wands.

Then you’re off to the Ronald Reagan Presidential Library and Museum for a guided tour and lunch. The museum and grounds are spectacular, with sweeping views of the Simi Valley, the surrounding mountains, and the Pacific Ocean. View an Air Force One aircraft that flew seven presidents, a recreated Oval Office, an exhibit on the Berlin Wall featuring parts of the wall itself, and more. Drive north to Santa Barbara, on the “American Riviera,” where you’ll dine at your hotel.

Go on a guided tour of 18th-century Old Mission Santa Barbara, home to an active Franciscan parish for more than 200 years. On a city tour, get a feel for the quiet beach community of Santa Barbara, long a celebrity hideaway, and visit the 1929 Courthouse, surrounded by lush gardens. Inside you’ll find murals depicting scenes of the city’s past, painted by a self-taught artist whose illustrations appeared in the novels of Joseph Conrad and Jack London. The Santa Barbara Botanic Garden is California’s oldest, and a guided tour reveals the diversity of the state’s native flora and vegetation. This evening you’ll have free time to enjoy your ocean-view resort or explore downtown Santa Barbara.

Get ready for scenic delights as you pass through rolling hills on this morning’s road trip. Entering the Central California wine region, you’ll find microclimates where morning fog and ocean breezes encourage varieties such as pinot noir and chardonnay, and others where low-lying mountains are ideal for full-bodied reds. Discover picturesque Solvang, a town with a distinctive Danish heritage, and enjoy lunch, a tour, and a tasting at Presqu’ile, a small family-owned winery.

Continue on to Pismo Beach, known for its long white beaches and ocean views. The evening is spent at The Cliffs Resort, overlooking the Pacific.

Drive along stunning Pacific Coast Highway 1 to San Simeon and Hearst Castle, a national and California Historical Landmark designed by revered California architect Julia Morgan. This elaborate estate created for newspaper magnate William Randolph Hearst takes you back to the opulent era of the early 20th century; the castle was the inspiration for Xanadu, the over-the-top mansion in Orson Welles’ film Citizen Kane. After your guided tour, it’s nature’s opulence that will impress you as you continue along the Pacific Coast, hundreds of feet above crashing surf and remote, rocky beaches, to the Big Sur Coast.

Your destination today is the coastal city of Monterey, where you’ll dine at your hotel on Monterey Bay.

Today’s tour of the Monterey Peninsula takes in the beauty of Pacific Grove, famed 17-Mile Drive, and Pebble Beach, before you arrive in Carmel-by-the-Sea, which was named one of the “most romantic cities of the world” by Travel + Leisure. Enjoy free time to explore the town’s galleries and find an appealing spot for lunch, before heading off to the award-winning Monterey Bay Aquarium to discover the delights of marine life, from cuttlefish to whales.

After lunch in Merced, your route continues from the valley to the oak-lined roadways and Victorian towns of Gold Country. In 1848, news of this precious metal spread like wildfire, leading to explosive population growth. First came the men seeking their fortune in mining; the merchants, bankers, and women followed. At the Mariposa Museum & History Center, you’ll learn about the lives of the miners and others who shaped this area.

Late afternoon, arrive at Yosemite National Park, where you'll spend the next two nights at the historic Majestic Yosemite Hotel.

The wonders of Yosemite National Park

Sometimes called a “freak of nature,” Yosemite Valley is only seven miles long and less than a mile wide. Yet contained within its sheer, high walls is an astonishing array of natural treasures – world-famous cliffs like El Capitan and Half Dome… plunging waterfalls like Bridalveil Falls… wild meadows and the meandering Merced River… birds to delight any birdwatcher… and much more. Get acquainted with the valley on a morning walk guided by a naturalist, then spend the rest of the day exploring Yosemite National Park as you please.

On your way from Yosemite to San Francisco, visit Jamestown for lunch at the historic National Hotel built during the height of the Gold Rush.

Arrive in San Francisco late this afternoon, with time to rest, relax, or explore the area surrounding Union Square. Your hotel is in a vibrant retail and cultural area in the heart of the city – and at your doorstep you’ll discover a favorite city square where you might just see musicians, artists, or speakers doing what they do best. Your Tauck Director can recommend restaurants in this city known for its range of cuisines inspired by fresh ingredients.

A sightseeing tour takes you up and down San Francisco’s hills with views of San Francisco Bay as you see Chinatown and the Marina District, rows of Victorian gingerbread houses, and Coit Tower. Go for a walk along the Golden Gate Bridge – and feel the breezes of the bay on a private catamaran cruise. Head to the salty atmosphere of Fisherman’s Wharf for free time for lunch and checking out its historic ships, sea lions, seafood stalls, and sourdough bread bakeries.

This evening join us at your hotel for our farewell festivities – a Tauck Exclusive Chateau Montelena winemaker reception with tastings followed by a wine-paired chef’s dinner.

Your Tauck California tour ends in San Francisco. Fly home anytime. A transfer from The Westin St. Francis San Francisco on Union Square to the San Francisco International Airport is included; you should allow a minimum of two hours for flight check-in.