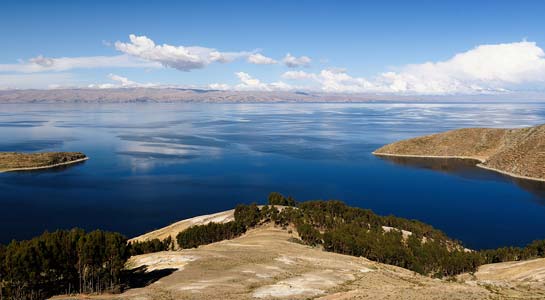 Empire of the Incas: Peru & Bolivia

The Empire of the Incas: Peru and Bolivia tour is a luxury 12 day adventure to the ancient Incas. Experience Machu Picchu and Lake Titicaca up close and in person as you make your way through the pages of history. This Tauck World Discovery tour is full of exclusive opportunities, expert guides and more.

This tour can bring your dreams of Peru and Bolivia to life hitting some of the most popular locations in South America along the way. One of the most memorable experiences on your Tauck Empire of the Incas: Peru and Bolivia tour is the time spent on the floating islands of Lake Titicaca. The locals there are continuing a way of life that began for their people many generations ago. You’ll also get a personal Peruvian cooking lesson from a local family. This amazing luxury travel tour packs the experiences of a lifetime in just short of two weeks as you traverse Peru and Bolivia.

Our tours of Peru and Bolivia begin in Lima. Upon arrival at Lima’s Jorge Chavez International Airport, you’ll be met by a Tauck representative and transferred to Belmond Miraflores Park Hotel, your home for your first two nights.

Your Peru tour begins in the lovely colonial center of Lima, originally mapped out by Spanish conquistador Francisco Pizarro, preserved on UNESCO’s World Heritage List. Following a welcome breakfast, you’ll be inspired by the city's age-old beauty and venerable traditions during a tour this morning. Some of Lima’s most historic buildings surround the splendid Plaza Mayor (or Plaza de Armas) – see the Archbishop’s Residence, with its fine carved balcony, and the opulent Government Palace, the official residence of the president of Peru. Visit the 16th-century Cathedral of Lima, whose first stone was laid by Pizarro himself in 1535. At the Monasterio de San Francisco, find a 17th-century complex with glazed tiles, carved ceilings, exceptional paintings and an amazing crypt. Have lunch at a local restaurant.

This afternoon, enjoy a guided visit to the Museo Larco, displaying an archaeological collection of gold, silver and earthenware acquired over a lifetime by Rafael Larco Herrera and chronicling 4,000 years of Peruvian pre-Columbian history. Join us this evening for a welcome cocktail reception and dinner at a local restaurant.

A short flight this morning takes you from cosmopolitan Lima to Cusco; continue overland to the Sacred Valley of the Incas for a two-night stay. Enjoy a barbecue lunch and an equestrian demonstration starring famous Peruvian Paso horses en route to your Sacred Valley hotel, where you can relax, have dinner and adjust to the higher altitude this evening... and have your journey blessed by a local shaman.

Like Egypt’s pyramids, mystery surrounds the construction methods used to build the massive stone Temple of the Sun and the Inca town of Ollantaytambo. One of the best preserved of the Inca settlements, this living museum reveals much about what life was like here in the 15th century during a tour; the people of the town still practice a very traditional lifestyle today, as you'll discover on a visit to a private home.

Return to your hotel for a demonstration of Peruvian cuisine preparation by a chef, followed by a scrumptious buffet lunch – and you'll learn how to make a Pisco Sour! Tonight, you’ll be treated to a performance incorporating music, dance, Andean traditions, Quechua lore and Inca mythology by the folk-arts group Kusiwasi, followed by a barbecue dinner.

Board the Vistadome train in Ollantaytambo and travel through mist-shrouded peaks that the Incas believed to be sacred to Aguas Calientes, gateway to the “lost city of the Incas,” Machu Picchu. Spending the afternoon exploring this incredible UNESCO World Heritage Site, recently named one of the “New Seven Wonders of the World,” with our local guides will be an unforgettable highlight of your Peru tour. Inspiration is everywhere amidst the architectural and aesthetic genius evidenced in the palaces, temples, houses and baths of this mountaintop, totally self-contained retreat. It is said by some that if you are a spiritually sensitive person and touch your forehead to the Intihuatana stone – still a precise indicator of the two annual equinoxes – you’ll be able to see into the spirit world!

Return to Aguas Calientes for an overnight stay at the Inkaterra Machu Picchu Pueblo Hotel... where you can enjoy a complimentary Pisco Sour at the bar (between 5:00 and 6:00 PM) prior to dinner at your leisure.

This morning is yours to do as you please... which might include rising super-early and returning before sunup to Machu Picchu to explore more of the site on a memorable guided sunrise tour; enjoying a nature walk through your hotel’s stunning gardens, home to many species of orchids and birds; checking out local shops and such in Aguas Calientes; or indulging in a soothing treatment employing local botanicals and a mystical Andean approach at the hotel's spa (for an additional charge).

After lunch, again board the Vistadome train for a scenic return rail journey, then drive to Cusco for a two-night stay. The beautiful Belmond Hotel Monasterio, named the “Best Hotel in South America” by Condé Nast Traveler, will be your home for the next two nights. Originally built in 1592, this former monastery in the center of Cusco will indulge you with its unique atmosphere, unequaled charm and gracious hospitality.

Just about everywhere you look in Cusco – once capital of the Inca Empire, and the oldest continuously inhabited city in the Americas – you’ll see traces of its Incan past and its importance to the Inca people as the “navel of the world,” as well as of the early Spanish colonial city built above it; walk through its bustling San Pedro marketplace, alive with contemporary mestizo culture, before heading outside town to see more testaments to Incan ingenuity.

At Sacsayhuamán, explore Inca ruins – a fortress built of massive stones without the use of mortar. Back in town, discover more about Cusco on a city sightseeing tour that includes the main square and a visit to 16th-century Convent of Santo Domingo; its arcades and artwork sit atop the walls of Koricancha, once a temple dedicated to the sun. Also visit the city's 16th-century Baroque cathedral – considered one of the most splendid Spanish colonial churches in America for the quality of its paintings and carvings, incorporating imagery from the Incan culture, such as the pumas carved on its enormous doors. The remainder of your day and evening are free in Cusco.

Fly this morning from Cusco to Juliaca, then continue on to your hotel in Puno, along the shores of Esteves Island on Lake Titicaca, where you'll have lunch. If you wish, join us this afternoon for an excursion to the pre-Inca archaeological site of Sillustani, with its cylindrical stone burial towers (chulpas) left by the Colla people, who were conquered by the Incas in the 1400s. Return to your hotel for dinner at your leisure this evening.

Legend has it that the Inca Empire began at Lake Titicaca when the sun god summoned his children from its chilly waters and sent them forth to establish Cusco. Centuries later, some of the indigenous people of the area – the Uros – dwell on forty-five Islas Flotantes de los Uro, floating islands made from reeds that dot the lake, living much as their ancestors did and still following their ancestral customs. View and visit some of these islands via powerboat, going ashore to meet the inhabitants and discover what their lives are like.

Later, on Taquile Island, visit the home of an Aymara family who will prepare lunch for you and perform some of their traditional dances. You’ll no doubt notice that on Taquile all the men seem to be industriously knitting, and you’ll see some of the items that they produce. Return to the hotel for an afternoon spent as you choose, and dinner this evening at your leisure.

To the heights of Bolivia Location Information Description

Begin the day by concluding your Peru tour with a drive along the coast of Lake Titicaca, then cross the border and enter Bolivia. En route to Bolivia's capital, La Paz, you'll visit the archaeological site of Tiwanaku – once the capital of a pre-Inca civilization that thrived here between 500 and 900 AD. Enjoy a typical Bolivian lunch, then continue on our journey through the South American Altiplano toward the Royal Mountain Range and our final destination, La Paz, Bolivia – the highest capital city on Earth – for a two-night stay; enjoy dinner at your leisure in the hotel this evening.

Begun on the site of an existing Aymara village, La Paz was founded in 1548 by Spaniards. The highest capital city in the world above sea level, La Paz is also home to the highest golf course on Earth; in the thin air, a good tee shot will travel an amazing distance! Venture just outside the city to explore the lunar-like badlands dubbed the Valle de la Luna (Valley of the Moon), a stone landscape of deep gullies and bizarre rock formations, before heading to La Paz's city center to soak up some local color and browse in the Mercato de las Brujas (Witches’ Market) for magic amulets, potions, spells or plants reputed to have healing powers.

From the Plaza Murillo, you’ll see the colonial-era Government Palace, known as the Burned Palace because it was set on fire during eight different revolutions; the Congress building had been a convent, a jail and a university before being renovated in 1904 to house the congress of Bolivia. Explore more of the city as you please this afternoon.

This evening, join us in lofty La Paz for a Tauck Exclusive private farewell reception and Tasting Dinner at Restaurant Gustu, founded by Claus Meyer (chef and co-founder of world-famous Noma in Copenhagen). You'll enjoy a sparkling four-course tasting menu featuring local Bolivian fare, with each course being paired with local beer, wine or spirits... all for Tauck guests only!

Tauck's tours of Peru and Bolivia end in La Paz. A transfer from the Camino Real Suites Hotel to La Paz El Alto International Airport is included. Please allow 3 hours for airport check-in formalities. Thank you for traveling with Tauck; we wish you a safe and pleasant journey home. Hasta la vista!

CRUISE.COM is a member, in good standing, of CLIA
©2021 CRUISE.COM All Rights reserved CST #2015595-50
Accessibility Statement
Become an Affiliate | Employment | Contact Us | Terms of Use | Privacy | TravelMart