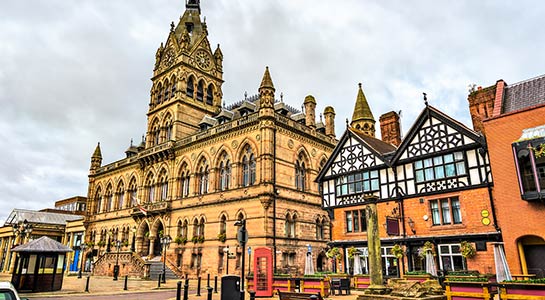 The England, Scotland and Wales Tauck tour is a luxury travel tour that winds through Great Britain over the course of 14 amazing days. You’ll see the storybook side of these great countries come to life alongside the bustling cosmopolitan cities. From exclusive tours of Scottish castles to whisky tastings you won’t soon forget.

Your England, Scotland and Wales luxury tour starts in Edinburgh, Scotland where you can explore this legendary town, take a guided tour to Stirling Castle and travel through the pages of countless history books as you make your way around town. This will set the tone for your two week tour of British pubs, museums and exclusive Tauck adventures that will have you sharing stories with friends for years to come. Book your Tauck tour now and see why this England, Scotland and Wales adventure is so popular.

Your journey starts with a guided visit to Stirling Castle, where memories of the historic struggle between the Scots and the English for control of the kingdom live on. Inside, you’ll find elaborately restored color and craftsmanship, reflecting the importance of the arts to its Renaissance-era royal occupants. Join us for a welcome reception and dinner tonight.

A sightseeing tour of historic Edinburgh with a local guide is the perfect place to begin any Scotland and England travel; enjoy an introductory tour to this city of cobbled streets, Georgian architecture and trendy lifestyles. Your tour includes visits to the Palace of Holyroodhouse, the Queen’s official residence in Scotland (if Her Majesty is not visiting), and famed Edinburgh Castle, built into rugged rock above the city skyline.

Next up is a journey through the aromas and flavors that lead to the perfect Single Malt Whisky. At the “Scottish Whisky Experience,” you’ll learn the history of Scotland’s most famous export, hear the stories behind the craft, and enjoy a tasting. Journeys departing August 3 – 24 will attend an outdoor evening performance of the annual Royal Edinburgh Military Tattoo.

Departing Edinburgh, you’ll travel south through landscapes of forest, rivers, castles and country houses to Cumbria, England’s northwestern-most county. In contrast to the long-ago scenes of skirmishes between the Scottish and British that once took place here, Cumbria today is a place of peaceful natural beauty. Sparsely populated, it is best known as the home of England’s Lake District and many a charming town and village.

Enjoy lunch in a grand manor house surrounded by gracious gardens. Traveling on through landscapes of woods, hills and tranquil fields, you’ll have time for a brief stop in the village of Grasmere. As you please, enjoy the sights of this pretty village of pubs, cafes and the churchyard where England’s poet laureate, Williams Wordsworth, was laid to rest. Or visit tiny Dove Cottage, where Wordsworth wrote some of his most famous poems before continuing on to your Lake District resort.

Living sculpture inspires the imagination today at Levens Hall, a manor house on the banks of the River Kent. Fine furnishings and paintings adorn this stately home, a family residence throughout its history and one of the best preserved Elizabethan interiors in the U.K. Best known for its gardens, Levens Hall is surrounded by an orchard, hedges, a pond, a Willow maze, rose and herb gardens, and thousands of flowers – plus the most extensive topiary garden in the world. Over 100 sculpted pieces, some several hundred years old, date back to their original planting in the 1690s, when this Dutch-style garden was all the rage (closed on Saturdays; alternate property is visited).

Spend the afternoon at leisure at your country club hotel before going to a local pub to learn the finer points of pairing your favorite ale with pub fare. Have dinner back at your hotel this evening.

Huge, strong and first built by the Romans, discover the power of walls built to keep ancient invaders out on a visit to the small city of Chester, England. Strategically close to Wales and the Irish Sea, Chester is one of England’s best preserved walled cities. The town is nearly completely encircled by broad walls which still offer grand views from atop.

After lunch on your own, you’ll head to Colwyn Bay, a seaside resort town on the north coast of Wales where you’ll have time to get settled in at your hotel and take in the idyllic views.

Evening brings an outing to Furnace Farm, part of the Bodnant Estate in the Conwy Valley – a place of tranquil mountains, lakes and moorlands. The farm’s 18th-century buildings have been lovingly restored as a home for the Bodnant Welsh Food Center, whose artisan chefs are devoted to sharing the best of Welsh cuisine using locally sourced ingredients. Enjoy a Tauck-only cooking demonstration, followed by dinner (and stories) with the chef.

Mighty Caernarfon Castle, a UNESCO World Heritage Site and the setting for the investiture of Prince Charles as Prince of Wales in 1969, sets a remarkable scale this morning. Constructed to endure, the palace was begun circa 1283 by Edward I as a symbol of English power over the Welsh. Enjoy a privately guided tour of the castle and then time for lunch on your own in the adjacent town.

En route back to your hotel, you may choose to stop to explore the walled city of Conwy, an earlier stronghold of Edward I, on your own. Or return to the hotel for relaxation and spectacular views. Enjoy dinner at your hotel this evening, where optional outdoor dining includes a view of Conwy Castle and the beauty of the bay.

It’s eastward England travel today, where literary history takes the lead. In the village of Shottery, you’ll visit the restored, timber-framed farmhouse and childhood home of Anne Hathaway, wife of William Shakespeare. Back in the Bard’s day, it was known as Newlands Farm and had more than 90 acres of attached land; today it’s a museum surrounded by gardens.

From here, it’s a short distance to Stratford-upon-Avon, where Shakespeare was born and raised. You’ll visit his birthplace and have time to browse exhibits that tell the story of how his name came to be known around the world, as well as check out the surrounding town at leisure; Stratford-upon-Avon's favorite son is buried in the town's Holy Trinity Church.

Late afternoon, it’s off to the bookish world of Oxford, one of the world’s most famous university towns. A guided orientation walk introduces its cobbled streets, guarded quadrangles, celebrated libraries and archaic traditions of learning. Dine tonight at Oxford University before returning to your elegant hotel – the bar was frequently used as the film setting for television's famed detective Inspector Morse’s pondering crime conversations.

From Blenheim Palace to a Cotswolds village Location Information Description

A first stop at St. Martin’s Church in Bladon offers an opportunity to visit the gravesite of Sir Winston Churchill. He explicitly chose to be quietly buried here, near his parents’ graves. Then discover a world of Baroque contrast at Churchill’s birthplace, Blenheim Palace and Park. The 18th-century palace was built as a celebration of the English victory over Louis XIV’s French troops at the Battle of Blenheim. Since the early 1700s, it’s been a home to 11 Dukes of Marlborough (Churchill was the grandson of the seventh). Your private guide will share the history and beauty of the palace and its extensive grounds.

After lunch, choose between spending time here to explore further on your own, or depart for nearby Woodstock Village. There you’ll find the charm of the Cotswolds: dove-grey cottages, a church, a village green and a park said to have once been Henry II’s royal hunting grounds – and a place of seclusion for his mistress. Back at the hotel, enjoy the evening as you please.

At Stonehenge, this morning’s self-guided walk around the famous ring of stone (bluestones from Wales and sarsens thought to be from the Avon River, some weighing as much as 50 tons) shares the mystery of its origins. Purposefully put into place some 5,000 years ago, Stonehenge was a massive undertaking requiring the labor of thousands.

Bath, one of Britain’s most beautiful cities, is your next destination. Arrive in time for lunch (and live music) at the stylish Pump Room Restaurant, set within the city’s ancient Roman Baths complex. Founded upon natural hot springs, the baths were built for bathing and socializing around 70 AD; they are among the world’s best preserved – as you’ll see on your included tour.

Founded by the Romans as a thermal spa and developed more than a thousand years later into a lavish resort by the 18th-century British aristocracy, Bath today reigns as a magnificent Georgian townscape crafted from native limestone. Architecturally, it ranks among Britain’s finest cities and enjoys UNESCO World Heritage status. You’ll learn why on a city tour with a local guide that takes in the 18th-century terraced houses known as the Royal Crescent and the Circus, distinctive elements of British urban planning that were later incorporated in the city of London. View the elegant Pulteney Bridge and Bath Abbey, where the first king of England was crowned. The remainder of the day is free to enjoy this inviting city as you choose.

Hampton Court Palace and on to London Location Information Description

n a morning’s drive toward London your first visit will be a visit to Hampton Court Palace, set in London's borough of Richmond Upon Thames. Grand in every way, during the 16th century Hampton Court Palace first caught the eye of King Henry VIII... and a legacy of monarchs in ensuing centuries contributed to the palace's rich history – and amazing artworks.

Arrive in London mid-afternoon for an introductory sightseeing tour of landmark sights before arriving for three nights at your iconic hotel, The Savoy. The remainder of the day is free to spend as you please.

London travel adventures are filled with history, culture and diversity. On this morning’s city tour you’ll experience the British capital's most iconic sights: Big Ben, the famed clock face and bell atop Parliament’s Elizabeth Tower; Buckingham Palace, housing the offices of those who manage the Queen’s affairs and a centerpiece for formal affairs of state; Hyde Park, one of the city’s Royal Parks and home to the Memorial to Diana, Princess of Wales; and historic St. Paul’s Cathedral, the masterpiece of Sir Christopher Wren, Britain’s most famous architect.

After an afternoon spent as you please pursuing what interests you most, this evening you'll enjoy the dual pleasures of dining at a West End restaurant followed by an evening at the theatre – your choice from selections of restaurants and shows.

Experience more of monumental London today on a guided visit to Westminster Abbey, site of England’s coronations since 1066, 16 royal weddings, and the final resting place of 17 kings and queens. The church houses not only remarkable tombs and memorials to statesmen, poets, scientists, musicians and others, but is a treasure trove of paintings, stained glass and artifacts. Following the tour, your afternoon is free to pursue what interests you most in London.

There are abundant opportunities to pursue art, history, architecture, Shakespeare, Bobbies or simply people-watching. But please save some energy and room for our farewell dinner at The Savoy, where you’ll definitely want to share your thoughts about this amazing journey and your Scotland, Wales and England travel experiences.

Note: Select 2018 small group departures, specially priced, include an exclusive presentation this evening by Carolyn Robb, co-founder of The Royal Touch and former Executive Chef to the royal household of TRH Prince Charles and Princess Diana. Ask for details.