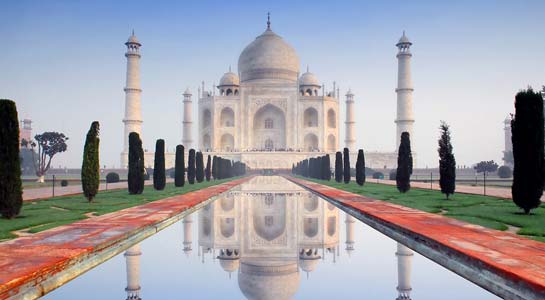 Golden Triangle and the Tigers of Ranthambore

Explore this fascinating country of contrasts on a 9-Day, Golden Triangle and the Tigers of Ranthambore escorted tour. Your incredibly scenic journey travels from Delhi to Jaipur with visits in Agra and Ranthambore. Bustling cities, serene jungles, UNESCO World Heritage Sites, fortresses, monuments and palaces are among the many highlights on this adventure.

Vivid colors surround visitors to India from gorgeous, brightly-hued clothing such as saris, kurtis and bandhgala to the deserted red sandstone 'Ghost Town' of Fatehpur Sikri. A thrilling rickshaw ride in Old Delhi transports you to Red Fort, dating back to Mughal Dynasty emperors and Chandni Chowk accompanied by the scent of spices wafting in the air. Visit Raj Ghat dedicated to Mahatma Gandhi. Learn about the Salaam Baalak Trust in Delhi, taking care of the city's street children. Tour such UNESCO-listed sites as Agra Fort, Humayun's Tomb, witness the ornate "Victory Tower" at Qutub Minar complex. Visit the breathtaking monument built from love, Taj Mahal. Explore the Maharaja of Jaipur's old hunting grounds, Ranthambore National Park. Shop for fabrics with kaleidoscope-colored embroidery at a local market. See the world's largest sundial at Jantar Mantar Observatory. You'll be fondly recounting stories and showing photos of this wonderful vacation for many years.

India's vibrant capital extends a lively welcome, launching an unforgettable journey through northern India's most exquisite sights. On arrival in Delhi, you'll be transferred to your hotel where you'll meet your Travel Director and fellow travelers for a Welcome Reception with drinks and local appetizers this evening.

Savor the scents of spice as you embark on an exhilarating rickshaw ride, navigating the busy streets of Old Delhi. See the Red Fort, a sandstone fortress which once housed the emperors of the Mughal dynasty for centuries.

Next, ride through the colorful Chandni Chowk market and watch it come to life as the day's trading begins amidst the sounds of enthusiastic salesmen and endless traffic. Visit Jama Masjid, one of the largest mosques in India and admire its ornate façades.

Board a waiting vehicle to drive to Raj Ghat, a memorial dedicated to Mahatma Gandhi. Pay tribute to this beloved figurehead, who led the campaign for India's independence from Britain. You'll come face-to-face with the site where he was cremated following his assassination in 1948. Today the simple square platform of black marble is surrounded by a tranquil park, befitting of its status as a place of contemplation.

Your next stop is Agrasen Ki Baoli, one of the most noteworthy stepwells in Delhi. Hidden amidst the cacophony of Delhi's streets and business towers, this ancient water reservoir rises from the depths of the earth to stand atop 103 stone steps. Spend a few moments of serenity amidst its centuries-old ornate arches before returning to your hotel for an afternoon of leisure or consider purchasing an Optional Experience.

'Dive Into Culture' this morning and join a guided walking tour run by one of the rehabilitated street children who were taken in by the Salaam Baalak Trust in Delhi. Your visit will 'Make A Difference' to this non-profit organization and the street children for whom it cares.

Later, walk through Paharganj Bazaar, rubbing shoulders with the locals who flock to the market to shop every day. Escape the noise and head to New Delhi, designed and built by the British in the 1920s. Your first stop here is a visit to the UNESCO-listed Humayun's Tomb, the earliest example of Mughal architecture in India. Recently renovated with the gardens restored to their former glory, you'll see first-hand why it served as the inspiration for the design of the famous Taj Mahal.

Enjoy local flavors for lunch at a restaurant near India Gate, then head to the Qutub Minar complex, also a UNESCO listed site. This fluted 'Victory Tower' is decorated with elaborate inscriptions, geometric carvings and elegant balconies. Returning your hotel later, you'll drive past Lutyens' Delhi to view the elegant colonial façades leading British architect Edwin Lutyens left behind on the cityscape. You'll have the rest of the afternoon free, or perhaps purchase one of the Optional Experiences.

It's time to leave Delhi behind, bound for the Uttar Pradesh city of Agra. While there are many reasons to love Agra, its own 'monument to love', the Taj Mahal is perhaps the most captivating. You'll have an opportunity to see its sun-kissed white marble façades just before sunset, watching as its elegant walls glow with rose and golden hues. Admire this well-preserved landmark from all sides. Step away from your fellow travelers for a minute and contemplate the magnificence of this man-made wonder before re-joining your group.

This evening, you could choose to end a memorable day with a purchased optional sound and light show prior to dinner.

There's more to Agra than the Taj Mahal as you'll come to discover this morning during your visit to the UNESCO-listed Agra Fort. Stroll through the chambers of a royal residence that was built in the 16th century and served as the principal residence of four generations of the influential Mughal emperors until the capital was moved to Delhi.

Continue on to the long-deserted 'Ghost Town' of Fatehpur Sikri, which was built at great expense by Emperor Akbar in 1569 only to be abandoned soon afterwards because of a lack of water. The city remains beautifully preserved, albeit with an air of melancholy - a rusty-red sandstone masterpiece without a population.

Later, enjoy lunch at a local restaurant in Bharatpur. Then experience first-hand a quintessential experience of getting around in India when you board a train bound for Ranthambore where you'll stay for the next two nights.

Start the day with an early morning visit to Ranthambore National Park, which was once the hunting ground of the Maharaja of Jaipur. Before the heat of the day sets in and the wilderness awakens, keep a keen eye out for the resident animal and birdlife that find sanctuary here. You'll also want to have your camera ready in case the park's tigers make a brief appearance.

Return to your hotel for a late breakfast, followed by some time to relax or consider purchasing an Optional Experience. After lunch, there's another opportunity to explore the park for glimpses of the various species of bird and wildlife on your second game drive of the day. Dinner is served this evening at your hotel.

Continue your journey to Jaipur, the Pink City. After some free time for lunch, join a workshop on hand-block printing, one of the most famous traditional art forms of Rajasthan. A skilled 'Local Specialist' will show you the tricks of the trade as you observe how the prints are handmade using small wooden blocks and hone your own block-printing skills.

Later, you'll see the talents of local craftspeople on display during a visit to a local market. Admire the colorful textiles and perhaps buy a memento or two to take home. Jaipur is particularly renowned for its embroidery and blue pottery.

This evening, join a local family for an exclusive 'Be My Guest' dinner in their home. 'Connect With Locals' and savor some of the regional delicacies.

One of today's highlights is a visit to the UNESCO-listed Amber Fort. But first, stop to admire the red and pink façades of the Palace of Winds, whose latticed windows once revealed the outside world to the sheltered ladies of the royal household.

Continue with a visit to the ornate City Palace, an impressive complex of buildings from different eras and gardens in the heart of the Old City. You'll have some free time for lunch before visiting the UNESCO-listed Jantar Mantar Observatory, featuring the world's largest sundial.

Later, you could choose to join an optional Aarti ceremony, offering a blessing to one of the Hindu deities and hopefully receiving one in return. This evening, our memorable encounter with northern India at its end, you'll toast to shared memories over a delicious local Farewell Dinner.

Bid a fond farewell to your Travel Director and fellow travelers at the end of an epic journey from Delhi to Jaipur. Transfer to Jaipur Airport for your onward flight or alternatively return to Delhi by coach departing at 10:00 and arriving to Delhi at approximately 16:30. The coach will drop off at Delhi International Airport and the Trafalgar post-night airport hotel; the Pride Plaza Aerocity.